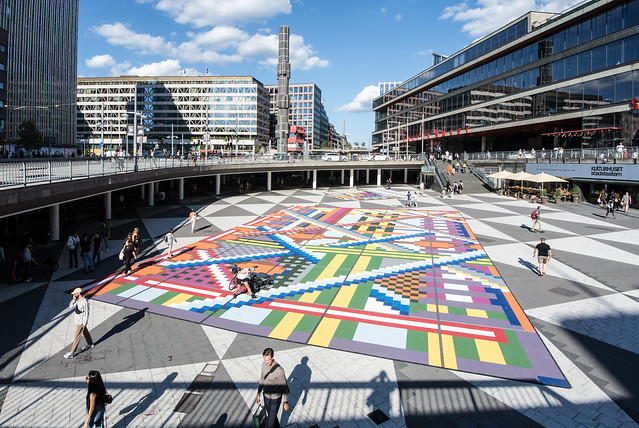 Continuing with the Sergels Torg theme…

I’ve somehow missed this collection of short stories, a slight ret-con of the Earthsea universe. Maybe it’s for completionists only but I enjoyed returning to Earthsea.

A Farrago of Freenode Fuckery

Today, I checked my existing connection to Freenode. I still had access to the old NickServ.

What was all this about? In three weeks, an IRC network that’s lasted for twenty years was flown into a mountain. Was that the plan all along?

Or is it wrong to ascribe to malice or forethought that which can be more adequately explained by stupidity or drug-fueled mania?

Anyway, watching Freenode implode is a bit like being on a ship that’s foundering. Almost everyone makes it over to another safely, and we’re standing at the railing, seeing the old ship slip beneath the waves. Some rats and trolls follow it down. It’s a sad memory, but in the end, it was only a name.

Why Gemini is not my favorite internet protocol

TL;DR: the Gemini protocol removes too much functionality for it to interesting to me.

Gemini is a simple web publishing protocol. It can be seen as a descendant, successor of Gopher. Gemini primarily emphasizes developer simplicity, and secondarily user privacy.

This comes with significant trade-offs for the author, however. Compared to standard vanilla HTML4, there are no inline links, no provision for media other than text on a page, and the styling of the content is left to the client.

My background is in web publishing - I’ve been fascinated by publishing since I was a kid and I’ve been involved in printing zines and in student newspapers etc through the years. The idea that I can publish what I want, when I want, at whatever lengths I want, for effectively free, is still mind-blowing to me, almost 30 years since I copied some HTML code and made it mine.

Here’s where Gemini falls down for me.

First, there’s no official client. The fact that it’s so easy to implement a client means there’s a Cambrian explosion going on, and the filtering die-back has not yet occurred. This might change in the medium future.

Second, the styling limitations are crippling. I can probably survive without having images etc. on the same page, but the lack of inline links (each link has to be on its own line) leads to stilted, quasi-academic jargony text like this:

Third, Gemini puts the cart before the horse when it comes to privacy. The solution to widespread tracking and user surveillance isn’t a bespoke hairshirt protocol that no-one is going to use. The solution is widespread legislation that makes using people’s personal data for targeted advertising illegal or very expensive. (This is not limited to Gemini. A great many influential Internet people are convinced politics is utterly broken, so “technical solutions” are all that’s left).

Gemini, to me, is part of the nostalgia for a past that never really was — the halcyon days of the Internet, before the Eternal September. But time is the great filter. What has survived from that era is not the spam, the pointless Usenet arguments, the shitposting, but finely polished nuggets. If you weren’t there, it might have seemed a paradise, but I was, and it wasn’t. It was today’s internet, but text-only and with proportionally even more white dudes.

This entry was submitted to Lobste.rs and spawned an interesting discussion. Among others, this piece was posted (comments), and this post was also mentioned.

I suggest those interested in Gemini and what it means to people to read the linked items and discussions.

I’d also like to clarify that I wrote this rant basically to have a single place to point Gemini proselytizers to. I need to emphasize that if you personally use Gemini, or find Gemini useful or fun, more power to you! I am not suggesting you stop or that your efforts are in vain.

Sadly, there are some Gemini enthusiasts who are the equivalent of people handing out flyers for some obscure club, and who get shirty when you try to politely explain that you’re not interested in attending. Those people are annoying, and they give Gemini a bad name.

Death of a channel

This is a short write-up of how a channel on Freenode was hijacked by staff, and how it was effectively deleted.

The channel #photography was founded on Freenode in 2001, as a channel to discuss photography. Its single-hash status was challenged by Freenode staffer lilo, and it was changed to #photogeeks to comply with the requirement for single-hash channels to be associated with a project.

In 2006, the channel #photo was registered to discuss photography per se, and not gear. Quite soon the channel became social in nature, and it was hidden and a password set.

Over the years, about a dozen people used this channel as a social space to discuss everything under the sun.

When the takeover of Freenode by Andrew Lee occurred, the channel was registered on Libera.chat, and on 2021-05-21, the topic was updated to say

(all times are in CEST).

A few hours later, Andrew Lee (rasengan) sent a network-wide wallop informing users that an attempt to enforce newly instituted rules against advertising other IRC networks had been overly broad and targeted more channels than intended.

It’s clear that our channel was included in this.

Users were encouraged to submit a request to Freenode staff to get their channels back.

The “regulars” of the channel were contacted via PM and informed that the Freenode channel was now closed. Most moved over to Libera. A few mentioned that they were permanently leaving Freenode.

As a good faith effort, prompted by Freenode promoters, I attempted to regain control of the channel at Freenode, but was informed that having a single-hash channel was not according to policy. The request was denied.

I’ve written this post to present my side of the story. Over the last weeks, I’ve been told on Freenode that the widespread channel hijacking of 26 May 2021 (some reports say that 700+ channels were affected) was either not as widespread as reported, or “justified” to stem the flow of users to Libera.

I’m also a member of the channel #lobsters, which suffered the same fate. However, in that case, the project had officially moved, and the Freenode channel was locked. Based on Lee’s rationale, I actually find the hijack justified, as there were presumably people who would prefer to remain on Freenode and discuss the site there. However, note that there very little warning before this happened. There was no attempt to contact the project to present Freenode’s case as a better IRC host than Libera. Freenode instead unilaterally decided they knew better than the project’s themselves.

When Libera was announced, I did not feel that the urgency presented by the staff there was entirely justified. Never would I imagine that Andrew Lee would, within a week, exceed those warnings by a wide margin.

I’m nostalgic for my almost 17 year old Freenode account. But the more time passes, the more bitter I become. I’m going to hang around in some channels to see how things work out. I’m open to a more humble approach from Freenode staff and boosters. But if I feel I can’t be a part of a network that treats its users as peons to be exploited, I’m out.